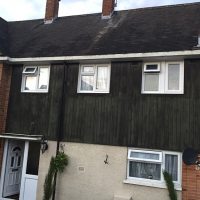 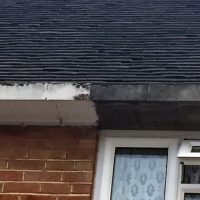 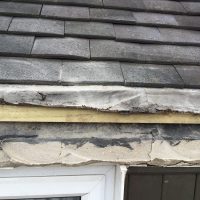 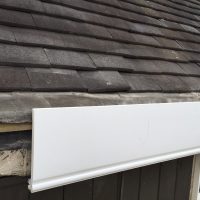 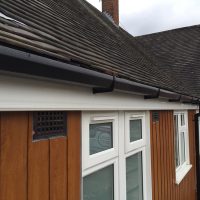 Summit Cladding were recently contacted by our client who lives in a nineteen-fifties style property in Roundhill Drive, Enfield.

The client and her family were experiencing issues with damp patches and mould on the internal upstairs walls of her house.

Summit Cladding had previously rectified a similar problem on the client’s neighbour properties and understood the dilemma she was experiencing.

The house was originally constructed using Finlock gutters, commonly known as concrete block gutters. Apart from creating cold spots and mould on the internal walls, they also leak into the joins from the outside, which looking very unattractive.

The only guaranteed solution to this irritating problem is to remove them and replace them with a modern gutter system.

Because of the weight of the concrete guttering blocks, it is necessary to erect conventional scaffolding at the areas being treated, as this can also be a health and safety issue

At the rear of the client’s house, there was also a conservatory that made the installation even more challenging.

After the scaffolding had been erected, we used an industrial angle grinder with a diamond blade to remove the concrete Finlock gutters.

After this has been carefully removed, we then installed a Tannerlised timber batten to the wall which reduces the cold spots on the internal walls.

After this, an 18 mm thick maintenance-free fascia board was fitted, along with a black deep-flow guttering and new down pipes.

Once this had all been installed, all the adjacent roof tiles were removed, and a eaves support tray was fitted under the roof felt. This encourages all the water to flow from the roof tiles into the new gutter

Now the house not only looks more appealing but all the issues connected with damp and mould inside the house have been solved.