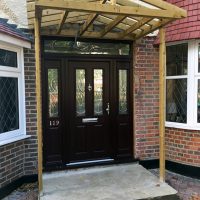 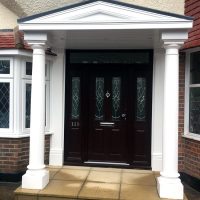 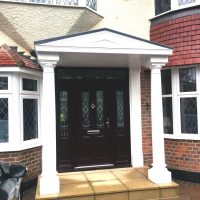 We all know that first impressions count.  So the importance of a “good look” to the front of your house can’t be overstated.

Summit Cladding was recently contacted by former clients who we’d worked for in 2006. They had just finished a major refurbishment of their beautiful house in Willesden, North West London.

The only job outstanding was to fit a Georgian style canopy to their front door. Our clients knew exactly what they wanted and even had a photograph of an example.

But there was one big problem.  The canopy they wanted was only available in one size and there simply wasn’t enough space at the front of the house because of two existing bay windows.

The previous builder had attempted the job, but because he was a general builder and not a canopy specialist, our client was concerned that he couldn’t complete the project.  Summit Cladding prides itself on fitting bespoke canopies and because our client had employed us in the past, he was confident we would meet his expectations.

For every problem there’s a solution, even if it takes a bit of hard work and imagination! So after several lengthy site meetings we had a plan of action – to build our own replica of the Georgian style canopy on site.

Summit Cladding started by extending the size of the step before fitting the GRP columns and fluted pillars to form the portico. This was complex in itself, because the columns had to be extended to create additional height to cover the glass fanlight window above the door.

GRP stands for Glassfibre Reinforced Plastic and is an amazingly versatile and strong material.

Summit then hand-built all the moulded details in pvc, as well as fitting three led spotlights in the recessed ceiling. We also fitted a bespoke resin fibreglass roof with a 20-year guarantee.

The client chose some new paving slabs and we completed the project by re-tiling the entrance – the whole installation taking seven working days to complete.

Our client is delighted with the result, as he says it looks just like the photo of the Georgian entrance canopy he originally had his eye on!