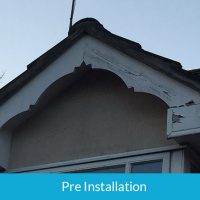 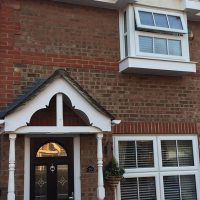 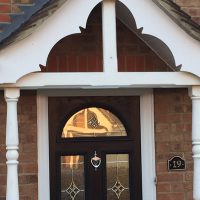 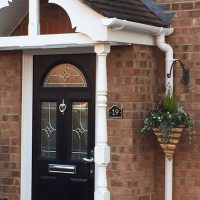 Now here’s a question: what do you do when your clients are not on speaking terms with their neighbours — but you need access next door to put up scaffolding?

Answer: get the builders to play Cupid!

This is a problem that Summit Cladding has faced in the past — and one that we had to face again in this latest job in a quiet cul-de-sac in Loughton, Essex.

We were approached by Victor and June who asked us to carry out the same work on their house as we had previously installed on a neighbours’ property.

But then we discovered that they were not on good terms with their neighbours and didn’t know whether they would allow us access to their property to erect scaffolding in their garden.

We suggested we would approach the neighbours independently and after lengthy but tactful discussions the agreed to give us access, with a written understanding that we would be responsible for putting right any damage that might be caused during the work.

With our two million pound public liability insurance, this wouldn’t be a problem, but the more important task was not to exacerbate any issue between the neighbours.  I briefed my fitters on the situation so everyone was aware to be extra vigilant

When the new development was built five years ago the builders had fitted a curved or scalloped fascia to the gable at the front of the house, as well as the same detail to the front porch. These were made of timber and were already showing signs of rot.

We started work on the Monday and during the course of four days’ work we fitted 18 mm thick white uPVC fascias and soffits, with white round gutters and down pipes. We also fitted recessed led light fittings into the tongue and groove soffit of the porch — a great security measure.

As an unexpected bonus, our clients’ neighbour kindly supplied our fitters with nice hot cups of tea, which is always very welcome at this time of the year, so to say “thank you” we carried out a small remedial gutter repair for the neighbour free of charge as a goodwill gesture.

The scaffolding was removed the next day with no damage whatsoever to the neighbours’ property and the best news of all is that the two neighbours are now once again on speaking terms with each other.  We were delighted to hear that neighbourly love is restored!