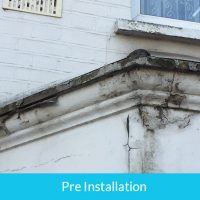 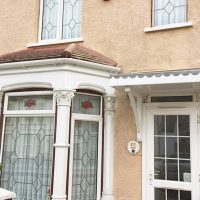 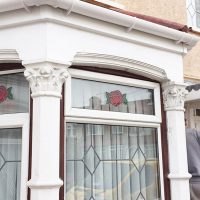 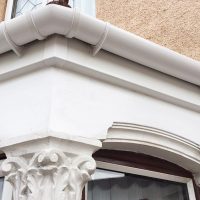 A recent insurance company survey revealed that one in ten DIY jobs are so badly botched that a professional builder has to come to the rescue.

Luckily Summit Cladding’s latest job didn’t get to that stage because the householder was wise enough to come to us before the problem arose!

Sylvia contacted us on behalf of her mum who’s lived in her terraced house in Edmonton, North London, for over 30 years.

She explained that her mum was extremely proud of her home — except for the exterior. She was worried that a DIY canopy above the front door might fall off the wall and injure someone.

Also, there was concrete guttering above the front bay window, causing damp in the lounge walls and crumbling of the render. This, in itself, was very unusual as most concrete, or finlock, gutters are fitted to the main house, not bay windows.

When we visited our client she had visions of fitting an imposing Roman style canopy to the front of her property complete with columns. Maybe it was to do with her Mediterranean roots?!

Time to get out my tape measure. Alas, there was no room to fit a normal Roman style canopy. But even if there had been, the columns would look out of place on a row of terraced of houses. We at Summit take pride in all of our exterior makeovers because each installation is an advert for us.

We pride ourselves on having an eye for detail but when we have a client with grand design ideas we have to be very careful and diplomatic!

After much negotiation, we persuaded Sylvia’s mum to see our perspective and eventually fitted a made-to-measure roman style canopy — but thankfully without the columns!

We fitted a traditional lead roof on the canopy with a scalloped detail and two LED spotlights. We also removed the original concrete guttering and fitted a foam filled upvc fascia board with white round pvc gutters.

The two-day installation provided a permanent solution to the damp and, with the new canopy, left the house looking great.