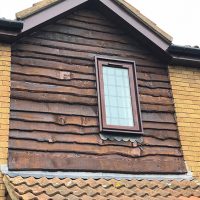 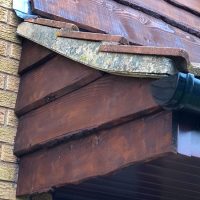 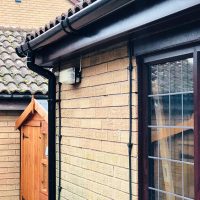 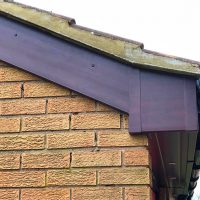 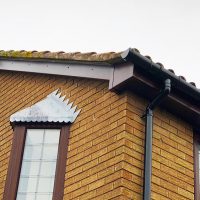 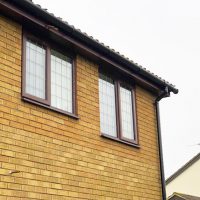 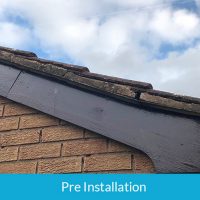 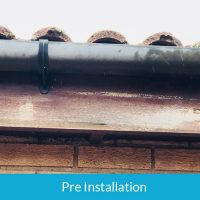 Summit Cladding loves a challenge. Especially when we get the chance to work with beautiful, natural timber.

Our client, David, invited us to quote for work at his house in St Albans, where he wanted all the old wooden bargeboards and fascia boards removed and replaced with a maintenance-free alternative.

David said he always prided himself on being a hands-on “Mr Fixit,” but as he was getting older, the thought of getting his ladders out again and doing the job himself was out of the question.

When I first met David he was sold on the idea of pvc replacements that had the look of timber. He was even more impressed when he saw a rosewood pvc sample with a grain effect that replicated timber.

But there was one part of the house that could not be replicated by using synthetic products, and that was the waney edge timber cladding fitted to the front of the property and to the sides of the front door canopy.

Waney edge cladding is a traditional style made by overlapping boards that have been sliced straight from the tree, with one straight edge at the top, but exposing a rough natural edge with bark on at the bottom. Examples of waney edge cladding, often stained black, can be seen on very old buildings.

David’s cladding was elm wood, as the uneven but sound edge of elm made it a popular choice. However, elm is prone to shrinkage and distortion and is, anyway, hard to source in the UK because of Dutch Elm Disease back in the 1970s.

So we decided to use Douglas Fir as a replacement. It is as sustainable as any building material, plus it is traditional, versatile and economical.

We therefore gave David the best of both worlds — replacing all the fascias, soffits and guttering on the house and garage in rosewood pvc, and installing lovely new timber cladding to replace the original timber boards.

David is delighted with the result – and he can now dispose of his ladders!