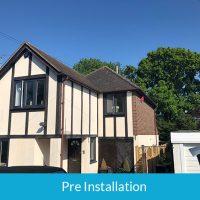 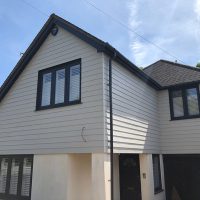 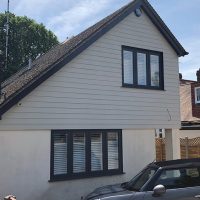 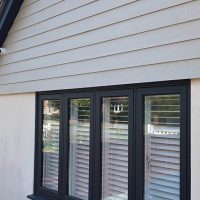 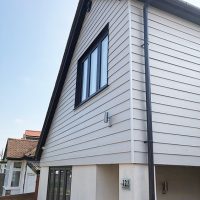 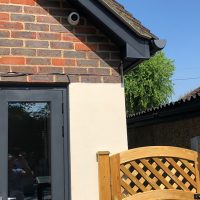 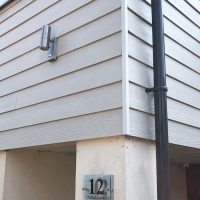 Moving house is a big event in anyone’s life, so it’s understandable that homeowners want to put their own individual stamp on their new property.

This was the case for Jackie and Paul, from Theydon Bois, Epping, who decided that the mahogany-stained fascia boards with mock Tudor beams had to go.

It was a look that was very popular in the 1970s and 80s, but styles change with the times, and Summit Cladding was pleased to come up with some new ideas for Jackie and Paul.

We suggested removing all the existing bargeboards, fascias and guttering and replacing them with new material in grey anthracite pvc. Grey is all the rage at the moment and it would compliment their new windows and bi-fold doors in the same colour.

The colour of the hardiplank cladding was more of an issue, as there were two colours – cobblestone and light mist — that my clients liked, but they were finding it hard to choose between them.

I suggested that I make up some sample panels in the different colours to help them decide.

Once they decided on the cobblestone, Summit began work by removing all the existing wooden fascia boards and fitting foiled grey anthracite fascias and soffits along with deep flow grey guttering.

We then fitted plywood sheets to the complete front and side elevations before attaching the cobblestone hardiplank cladding with powder coated aluminium corner trims. The ceiling in the recess by the front door was also fitted with cladding.

The two-week transformation of the house attracted lots of positive comments from neighbours, leaving Jackie and Paul delighted with the appearance of their new home.