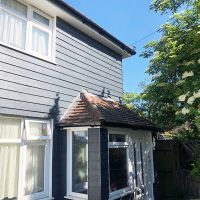 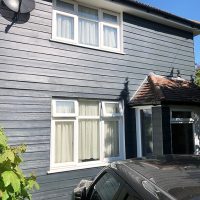 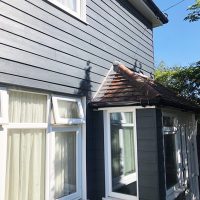 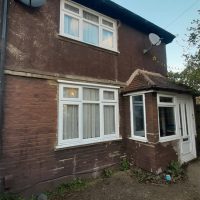 Some of our older readers might remember the Danny Kaye song from many years ago: “There once was an ugly duckling…”

Well that was how our client, Chrissy, saw her own house when compared with her neighbours’ homes in a leafy part of Kingston-upon-Thames, south London.

Chrissy’s “ugly duckling” house had fallen into disrepair due to personal circumstances, but she had watched as all the neighbouring properties were refurbished and she wanted to make her mark as well.

When I visited for the first time I noted that much of the cement and brickwork had minor cracks. Although the building was structurally sound, this would have to be remedied before Summit could fit the cladding. There were also large gaps around the badly fitting windows which would have to be filled.

Then, after the remedial work on the cement and brickwork, we fitted a waterproof vapour barrier followed by James Hardie cladding in Anthracite Grey which looks stunning and, of course, needs no paintwork or maintenance.

We then trimmed all the gaps around the windows and fitted new lead flashing to the front porch roof.

As you can see from the before and after pictures, the ugly duckling – in the words of the song — has been transformed into “a very fine swan indeed,” thanks to Summit Cladding!